by SAT Reporter
in in Southern Africa, Just In, Zambia
0

The three industrial milling plants, with a combined capacity to produce 520 tons of mealie meals per day, are expected to enhance food security and reduce the price of mealie meals used in preparing the country’s staple food.

The commissioning ceremony was attended by Du Xiaohui, the Chinese Ambassador to Zambia and Ambrose Lufuma, Zambia’s Defense Minister. 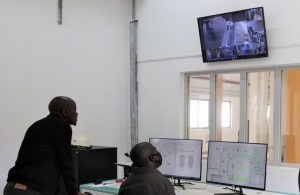 In his remarks, the Chinese envoy said the commissioning of the project was yet another milestone in enhancing the cordial bilateral relations between the two countries.

He said the project will go a long way in enhancing food security and stabilizing the price of mealie meals in the country.

According to him, China has always shown keen interest in supporting Zambia’s agriculture development and food security in various forms.

He cited the China-supported Demonstration Center which has supported the cultivation of high-yielding crops as well as provided technical training to about 5,000 people in recent years.

China was open to other proposals aimed at tapping the potential of agriculture cooperation with Zambia, he said.

On his part, the Zambian minister expressed gratitude to China for the support, saying it will go a long way in not only boosting agricultural production but reducing the price of mealie meals.

Lufuma said Zambia will forever be grateful to China for the support rendered over the years, adding that China has been a reliable partner and has been ready to step in and support when called upon.

According to him, the project has not only provided jobs during the construction stage but about 300 additional jobs have been created by the project while local people will be imparted with technical skills on how to run the milling plans.

The milling plant project is under the Presidential Milling Plants Initiative. Previously, over 1,000 solar-powered milling plants have been installed in various parts of the southern African nation since 2015.

Ramaphosa calls for ‘reinvigoration’ of trade with UK