Africa is leading the way in solar power potential

by SAT Reporter
in Climate Change
0

But unlocking this potential will involve multiple governments and partners working together. 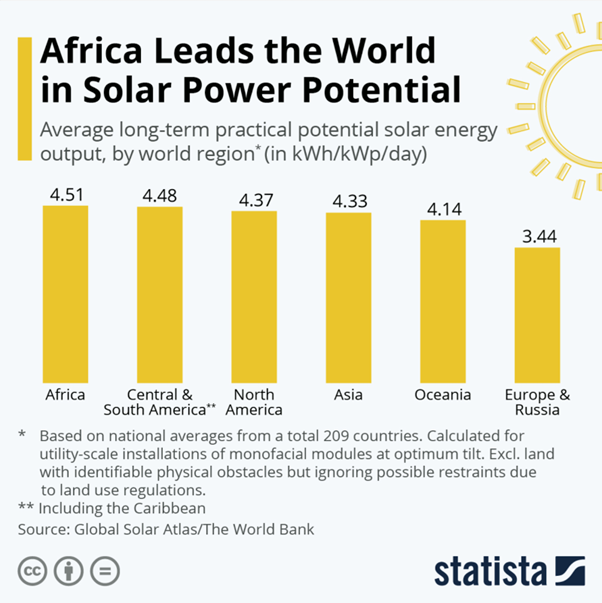 Africa is the only region in the world where a measure indicating “excellent conditions” for solar power is exceeded.

In the less developed countries of Africa, a lot of this potential is still untapped, says Statista.

But the World Bank’s Global Solar Atlas, whose data Statista analyzed for its infographic, still describes Africa’s solar potential as a “unique opportunity” to provide affordable, reliable and sustainable electricity to “a large share of humanity where improved economic opportunities and quality of life are the most needed”. 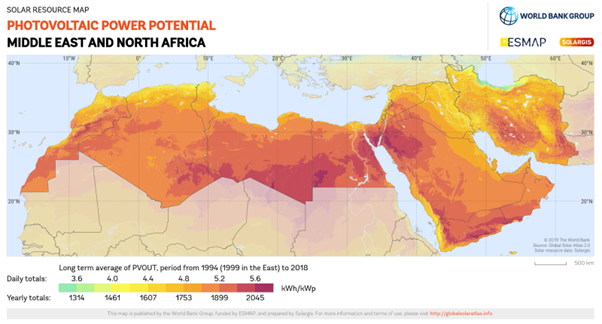 According to the International Energy Agency (IEA),Africa has 60% of the world’s best solar resources, but only 1% of solar generation capacity.

To achieve its energy and climate goals, Africa needs $190 billion of investment a year between 2026 to 2030, with two-thirds of this going to clean energy, the IEA says.

The World Bank, the IEA and other partners including the United Nations recently called for developed economies to provide more support todevelop the energy and renewables sectors in developing economies including Africa.

Statista notes in a separate graphic that Africa is one of the regions most at risk from climate change, although it only emits about 4% of greenhouse gas emissions globally.

Lack of water, falling food production, more extreme weather events and lower economic growth – which contribute to “mass migration and regional instability” – are some of the ways climate change is impacting Africa, the IEA says.

A global ‘climate resilience’ ranking of 136 countries by consultancy Henley & Partners shows that the eight least resilient countries are all in Africa.

Richer countries known to have higher greenhouse gas emissions, on the other hand, have higher climate resilience scores, with the United States, Germany and the United Kingdom ranked the most resilient to climate change.

Solar power can help Africa reduce emissions andwiden access to electricity, but the continent is only in the early stages of building its solar resources.

Statista reported earlier this year that Africa generates 9% of its energy from renewable resources, and that solar capacity in Africa grew 13% between 2019 and 2020.

For rural areas, solar energy brings power without expensive connections to the electricity grid, PwC says. Solar panel technology is also the cheapest of all renewable technologies at $995 per kilowatt.

South Africa and Egypt have the biggest solar capacity, followed by Algeria, the report says.

By 2050, energy company BP predicts that around 30% of Africa’s energy production will be from solar power.