by SAT Reporter
in West Africa
0

At Gaya in southwest Niger, near the border with Benin, the longest oil pipeline in Africa is being built.

With a projected length of nearly 2,000 kilometres (1,240 miles) — including 1,250 km in Niger itself — the pipeline will connect oil wells in the eastern region of Agadem, a zone troubled by deadly jihadist incursions, with the Beninese port of Seme.

Climate campaigners are clamouring for an end to investment in carbon-spewing fossil fuels.

But in Niger — the poorest country in the world according to the benchmark of the UN’s Human Development Index — this project is seen as an economic lifeline.

The landlocked West African state became an oil producer in 2011. The China National Petroleum Corporation (CNPC), exploiting the reserves, has been sending oil by pipeline to refineries in Zinder in south-central Niger.

For exports, Niger initially planned to ship crude through the Cameroonian port of Kribi via neighbouring Chad.

It eventually opted for the “Beninese corridor” terminating on the northern rim of the Gulf of Guinea.

Launched in 2019, the project was supposed to be completed in 2022, but the Covid-19 pandemic slowed it down, said Nafiou Issaka, deputy general manager of the West African Oil Pipeline Company (WAPCO).

More than 600 km of pipeline has already been laid, and Niger is on track to sell crude on the international market from next July, according to the ministry of petroleum and energy.

More than 700 soldiers have been deployed to ensure security for the project, though a large part of the territory it crosses has so far been spared from jihadist violence, according to a security source who asked not to be named. 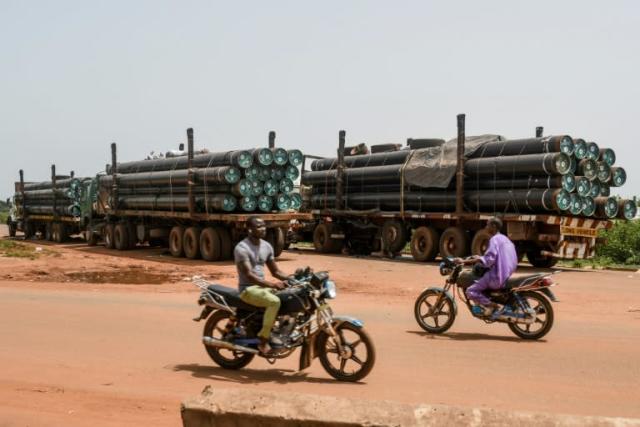 Niger has long been a major producer of uranium, ranked in global 7th place in 2021 with a total output of 2,248 tonnes, after a year-over-year decline in the past decade, according to the World Nuclear Association.

But uranium revenues continue to fall and the country’s leaders are banking on oil to boost the national budget, much of which is devoted to the fight against jihadists in the southeast and the west.

Six billion dollars will be invested in the pipeline.

“It is Niger’s biggest investment since independence” from France in 1960, said Kabirou Zakari, who heads the ministry’s oil refining division.

Oil could then “generate a quarter of the country’s GDP” — more than 13.6 billion dollars in 2020 according to the World Bank — and “about 50 percent of Niger’s tax revenue”, compared to four percent and 19 percent respectively today, added Zakari.

He estimated Niger’s oil reserves at around two billion barrels. According to official projections, Niger will produce 200,000 barrels per day in 2026.

The Algerian oil company Sonatrach has announced an “encouraging” discovery of oil in Kafra, a vast area of 23,737 square kilometres (9,165 square miles) on the border with Algeria.

The British company Savannah Energy, a major player in the gas industry in neighbouring Nigeria, says it too has found deposits in the Agadem region, where the Chinese are already operating.

A black market for oil products is flourishing in the capital Niamey and in other big cities. A litre of petrol (gasoline) exchanges hands for 300 FCFA (40 US cents), just under half of the price at the pump.

On Tuesday, Niger’s President Mohamed Bazoum said fuel smuggling organised from neighbouring Nigeria had become a source of “supply for terrorists” and called for a crackdown.