Africa’S Tech Space Is Thriving Amidst A Global Meltdown

by SAT Reporter
in African Start ups, Just In
0

Global finance media has been anything but merry in the past weeks. It has been a binge of news about heavy selloffs in several asset classes because of fears that a valuation bubble is causing a global recession. At the same time, we’re seeing a sharp decline in startup valuations.

In May this year, VC funding fell under $40 billion for the first time in over a year. According to data from Crunchbase, an industry trends analytics company, VC funding stood at $39 billion, down 20 per cent from $49 billion a year earlier in May 2021 and far below November 2021’s peak of November 2021.

In the first quarter of 2022, the US and Asia each recorded 1 per cent year-on-year declines in venture funding. Europe and Latin America saw growth of 33 per cent and 35 per cent, respectively.

However, in Africa, the story is not the same. According to data from The Big Deal, an Africa-focused database, Africa was the only region to record three-digit growth in the first quarter of 2022, with venture funding up 150 per cent to hit a record $1.8 billion compared to $730 million in the same period in 2021. That’s even more than was raised in all of 2019. Kenya alone attracted more venture funding in the first three months of 2022 ($482 million) than it did throughout 2021 ($412 million). 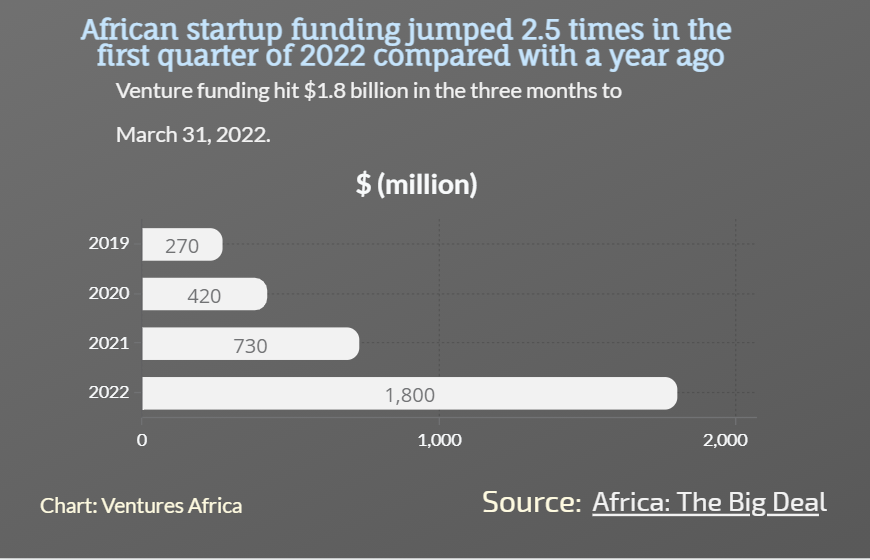 That’s not all. The ecosystem has consistently broken records, month after month, for seven months till May 2022.

Why is the continent recording such impressive growth against global trends?

While Africa’s growth in tech has been impressive, startup funding on the continent is still a drop in the ocean of global venture funding. According to CB Insights State of the Venture Report, it represented only 1% of the world’s venture funding in the first quarter of 2022. So it’s understandable that the trends in major markets have little to no effect on Africa.

At the same time, the African market is unique. Its evolution hasn’t been the same as others. In markets like the US and Europe, there has been plenty of focus on improving already existing solutions, e.g. making deliveries faster in e-commerce. Meanwhile, in Africa, solutions like ed-tech, fintech and telemedicine are still in their infancy. So while consumers in Europe or the US looking to reduce their expenses in response to the economic crunch may, for example, ditch a fast-delivery service or an investment app, a mobile banking or mental health startup is less likely to be dropped.

Maxime Bayen, Senior Venture Builder at BFA Global and co-founder of The Big Deal, also shares this sentiment. “For now, startup funding keeps growing in the continent,” he told Ventures Africa via text. “Some factors that could explain the resilience of the ecosystem include: the fact that startups in Africa focus on huge problems that affect people’s primary needs (food, health, education etc.); the fact that valuations didn’t reach such extremes in 2021 as in the U.S. for instance and lastly; the fact that startups fundamentals are good (startups that raise funding in Africa are generating revenue, have a road to profitability, are not burning excessive cash etc.).”

Not all that glitters…

Historically, the second halves of the years have seen more venture funding flow to African startups vis-a-vis the first. For instance, startups closed venture deals worth $1.19 billion in the first half of 2021 but closed $3 billion in the second. But it’s still too early to say whether this year will be the same.

Most fundings still go to startups in a few countries, including Nigeria and Kenya. And in these countries, fintech still dominates venture funding for startups. It represented 54 per cent of all venture funding on the continent in 2021 and, so far, is responsible for the biggest deals in 2022. Most fintech startups that closed investment deals offer the same service — mobile payment. It’s apparent that most founders and investors are concentrating on the same market. And while the conversation always comes back to how large the market is, a Rest of World report shows how most tech startups don’t have data on their market. According to the report, many investments were based on hype, not due diligence. And if that hype cycle loses momentum, we might see a decline in startup funding.

“Yes, there will be probably more hesitation (and sometimes due diligence) from investors in the coming months,” Bayen said. “But again, the level of due diligence by investors in Africa was already quite high compared to other regions.”

Is replacing the Central Bank with a Currency Board the panacea to Zimbabwe’s Monetary woes?

How a Zimbabwean startup is going regional