Mozambique: Looking to its Past for Lasting Peace

by SAT Reporter
in Analysis, Opinion
0

The government of Mozambique has taken many approaches to end conflict and encourage economic development in the past fifty years. Colonial independence, nationalization, villagization, and Marxism were all tried, with accompanying political upheavals, civil war, and massacres.

Peace and economic stability was finally reached in the 1990’s, under the newly elected democratic government. Former Mozambique President Joaquim Alberto Chissano credited the sustained peace and resulting economic development to the implementation of Invincible Defense Technology (IDT) under the Mozambique military and police.

IDT is a brain based technology which utilizes the non-religious Transcendental Meditation (TM) techniques. Hundreds of scientific studies have been conducted at more than 200 independent universities and research institutions, published in peer-reviewed scientific and medical journals. These studies confirm that regular practice of TM produces major increases in calmness, happiness, creativity, energy, and clarity of mind. Over six million people worldwide of all religions, cultures and ages have learned TM and experience these benefits.

When sufficient numbers practice TM, and particularly the more advanced TM-Sidhi program in large groups together, a powerful field effect of coherence and peace is generated. This effect spills over into the surrounding population.

This field effect was demonstrated in 1993, when over 4000 TM experts gathered in Washington, DC as a “National Demonstration Project to Reduce Violent Crime and Improve Governmental Effectiveness in Washington.” As predicted, research published in Social Indicators Research showed that crime dropped 24% and public approval of the US president suddenly changed from a negative trend to a positive trend.

Research indicates that such calming effects can also be created on a national level. A recent study published in Studies in Asian Social Science showed that large group practice of these programs in Cambodia between 1993 and 2008 was associated with a 96.2% decline in sociopolitical violence in that war-torn country compared to violence in the preceding three years.

The authors conclude the likelihood this reversal in the rising 1990–1992 trend of violence occurred randomly was one chance in 10 million. Other published research has shown that after advanced TM was applied, Cambodia’s gross domestic product (GDP) growth rates averaged 8.9%, and poverty was reduced by 63% between 1994 and 2008. By 2010 Cambodia was ranked 63rd out of 152 countries on the international scale of poverty, an unprecedented jump of 89 places in less than one generation.

After Mozambique’s implementation of IDT, a study published in Canadian Centres for Teaching Peace documented these positive changes in Mozambique. Unfortunately, once President Joaquim Alberto Chissano left office, cynics dismissed IDT as being the most important conveyor of such positive changes, resulting in the disbanding of the military and police IDT coherence-creating groups.

Today Mozambique faces a daunting task: uniting the country in the midst of a raging pandemic with its resulting economic devastation and societal discord; all overshadowed by the recent specter of Islamist insurrection.

It would be wise at this time for Mozambique to again establish IDT coherence-creating groups to deploy this simple and cost-effective approach and thereby create national unity and lasting peace. Any large group of experts trained in the advanced TM techniques could produce these results.

The groups could be comprised of military units, congregations at places of worship, prisoners, the elderly in retirement homes, even students as was done in Cambodia. The important factor is that the techniques be performed by trained TM experts consistently in groups twice a day. Simply by doing this Mozambique’s current high societal tensions could again be eradicated.

Violence has historically been the response to national differences, despite its costs both in financial and human terms. What Mozambique needs now is for its leaders to recognize that there is a more effective proven way to resolve differences. TM is that scientifically-verified approach, and now is the time for Mozambique’s leaders to again utilize IDT to dissolve high political tensions, improve the economy and create lasting peace. 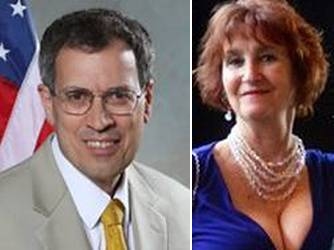 Arlene J. Schar has served as Dr. Leffler’s Executive Assistant at the Center for Advanced Military Science (CAMS) http://www.StrongMilitary.org since 2015. She has edited and co-authored many of Dr. Leffler’s articles.

Dr. David Leffler served as an Associate of the Proteus Management Group at the Center for Strategic Leadership, US Army War College. Currently, he serves as the Executive Director at CAMS.

AfDB report shows Africa is the place to invest in 2023

China is not responsible for African debt distress

With Jobs at Home Scarce, Young Chinese Are Heading to Africa