In an apparent clarification on the mandate of the East African Community Regional Force (EACRF), Dr Ruto suggests the new mission departs from traditional peacekeepers by ensuring those who don’t comply are dealt with

by SAT Reporter
in Eastern Africa
0

Kenyan President William Ruto on Monday said the East African Community (EAC) troops deployed in the Democratic Republic of Congo would ‘enforce peace’, not ‘keep’ it.

In an apparent clarification on the mandate of the East African Community Regional Force (EACRF), Dr Ruto suggests the new mission departs from traditional peacekeepers by ensuring those who don’t comply are dealt with.

It was the first time an EAC leader had clarified the role of the troops, which have been arriving in eastern DRC since two weeks ago, to combat the rebel menace, including that of the M23. 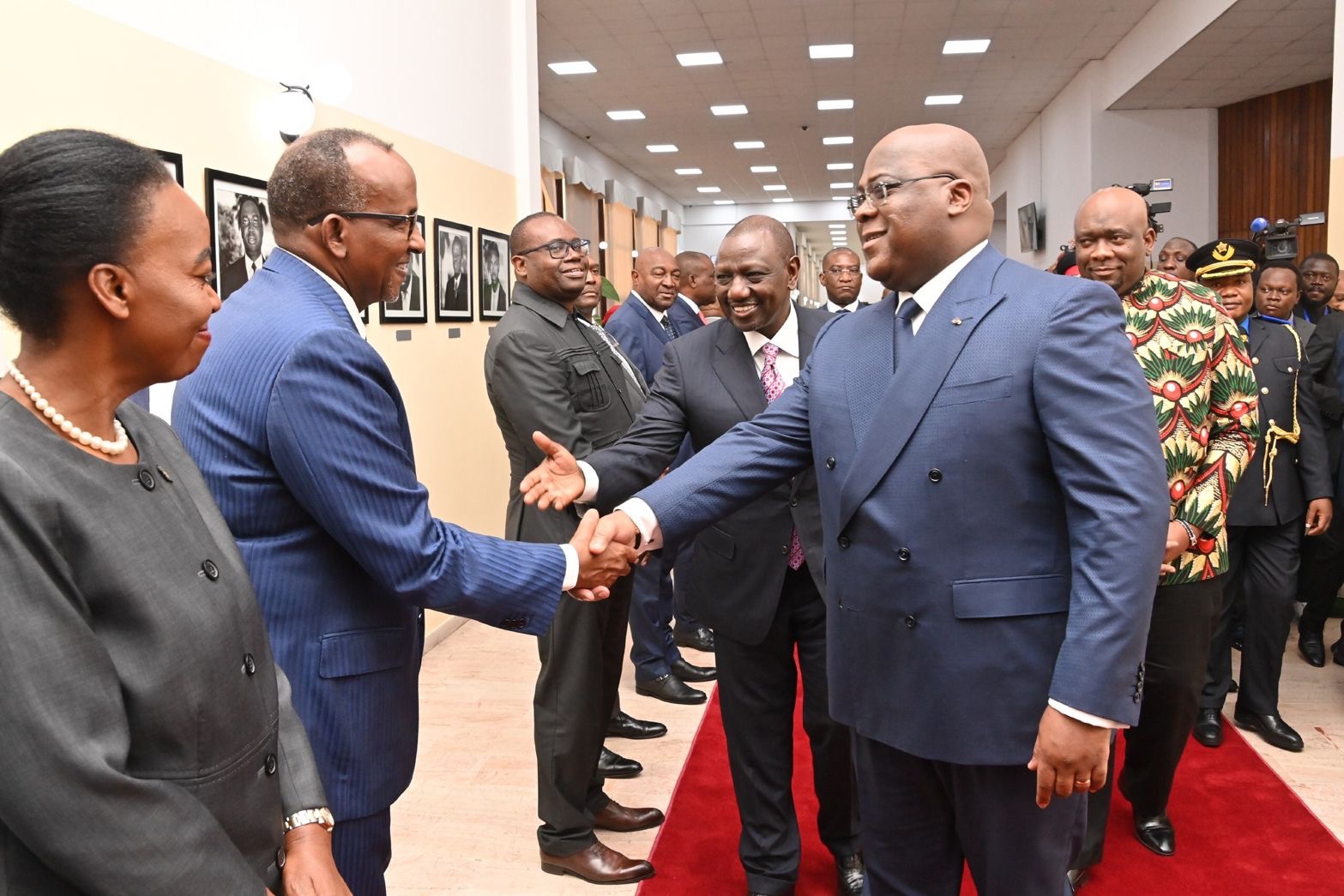 Dr Ruto spoke in Kinshasa, the capital of the DRC, his first visit since he was elected president. He met with his host President Felix Tshisekedi with whom they discussed various issues for about an hour.

Dr Ruto insisted his troops are taking part in the DRC’s security mission to help “restore” peace in the troubled east of the country.“We are acutely aware that we have many peacekeeping troops in DRC. But from where we sit as a region, we do not think there’s so much peace to keep,” he said.“That’s why it is necessary for a peace enforcement contingent under the East African regional force. That is the mandate upon which the Kenyan troops in the context of the East African regional force are operating.”Read: Regional force to replace Monusco in DRCIn UN parlance, missions with enforcement capabilities, such as the African Transition Mission in Somalia (Atmis), have mandates to defend installations and civilian sites but can also crack down on armed groups or terrorists, neutralise or force them to surrender. 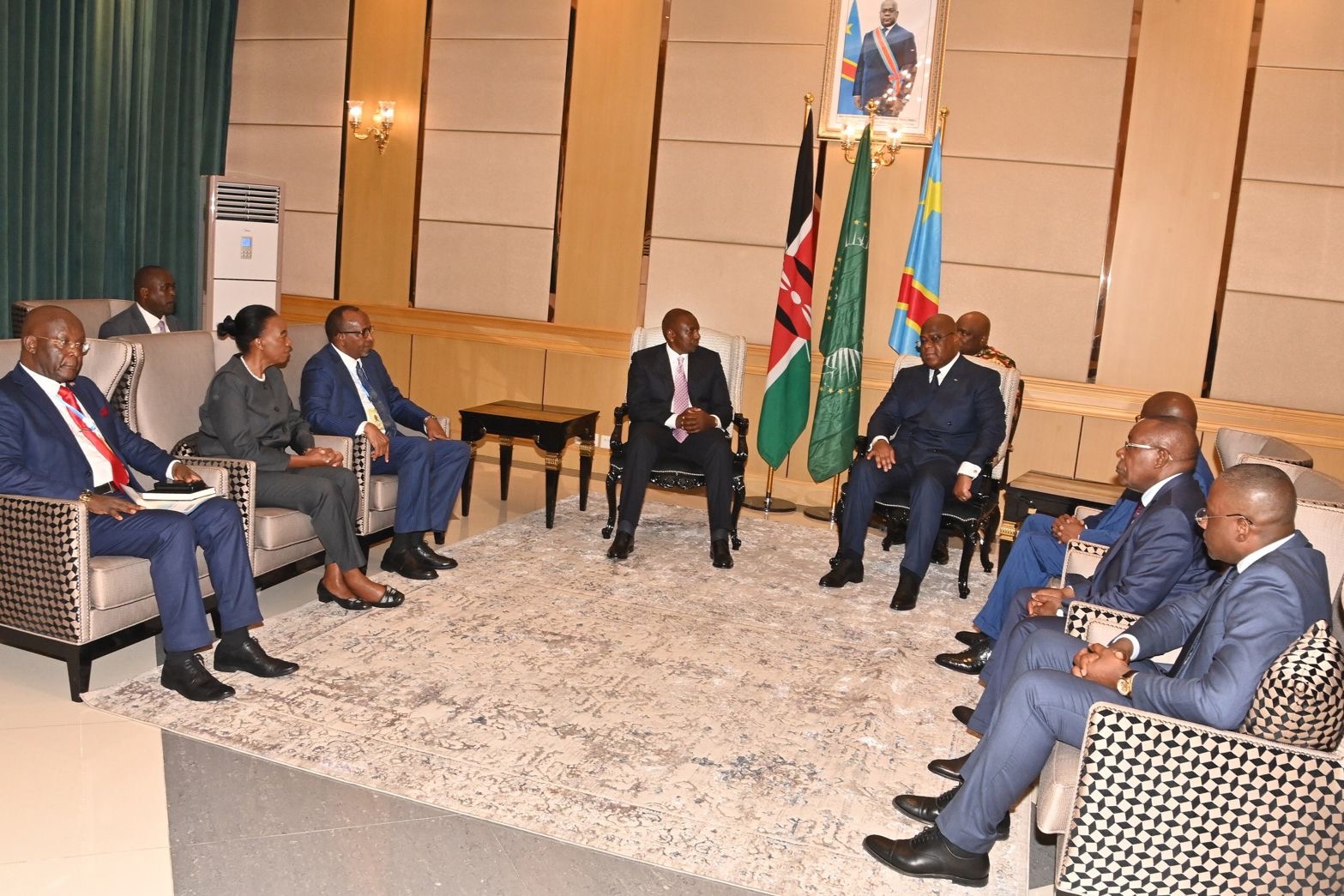 The new EACRF is not a UN mission, but its concept of operations must adhere to global standards of war.

Dr Ruto, who was on a one-day official visit to Kinshasa, reiterated what his senior government officials had claimed before: That the conflict in eastern DR Congo was hurting everyone in the region.“Kenya reaffirms its support to restoring peace and sustainable stability in the eastern Democratic Republic of the Congo and the region at large,” he said after the two met at the presidential palace in Kinshasa.“Without peace, no country or individual can have the space to prosper.”Some Congolese had been raising questions after the statements by the force’s commander Maj-Gen Jeff Nyagah, who said that the first priority for resolving the conflict in Congo is “the political option with the Luanda and Nairobi processes currently in place.”Read: Luanda hosts summit on DRC, Rwanda crisisThe Kenyan military officer had told the media at their outpost in Goma, eastern DRC, “only after diplomacy and the disarmament process have failed will military force be used.”Read: KDF: We’ll protect Goma airport from rebelsThe public opinion in eastern DRC has been that authorities do not negotiate with M23, which are seen as the cause of the latest population displacements. The UN last week said at least 13,000 people had been forced out of their homes as the rebels engaged Congolese troops near Goma.

They agreed to form a joint committee to elevate their bilateral relations, signalling the first attempt to implement some of the past pacts the two countries had signed.

A communique from Kinshasa said the committee should be up and running as soon as possible, led by technocrats from respective ministries.

As a newspaper our dedication is to providing balanced news that keeps you informed and we do so independently. We need your vital support to keeps us fiercely independent with no intrusion into our editorial decisions. This allows us to keep our reporting open for all, as we know not everyone is in a position to pay for news. But if you are, we need you. Make an investment in quality journalism, so millions more can benefit. Support us today from as little as £1. Thank you. Simply CLICK HERE

Ramaphosa calls for ‘reinvigoration’ of trade with UK

Gates Foundation pledges $7B for health, farming in Africa

Kenya shilling plummets to record low amid rise of dollar