by SAT Reporter
in Health
0

Meet Milton, the automated robot designed to deliver medicines and other items around hospitals.

Academy of Robotics, a small British artificial intelligence company, has been working with staff at Milton Keynes University Hospital (MKUH) NHS Foundation Trust to create and trial a delivery robot or “Helper Bot” to help speed up hospital processes and relieve pressure on staff.

The first-of-its-kind trial began with the Helper Bot navigating itself from A to B within the hospital in late November and will continue with operational trials in 2023 where the Helper Bot will be delivering medicines on specific routes to assist hospital staff. The trial will initially focus on tackling challenges with delays to care caused by increased demand on logistical activities such as the movement of medicines, specimens, and clinical supplies around the hospital. It follows a year of technological development in close collaboration with staff across the hospital. 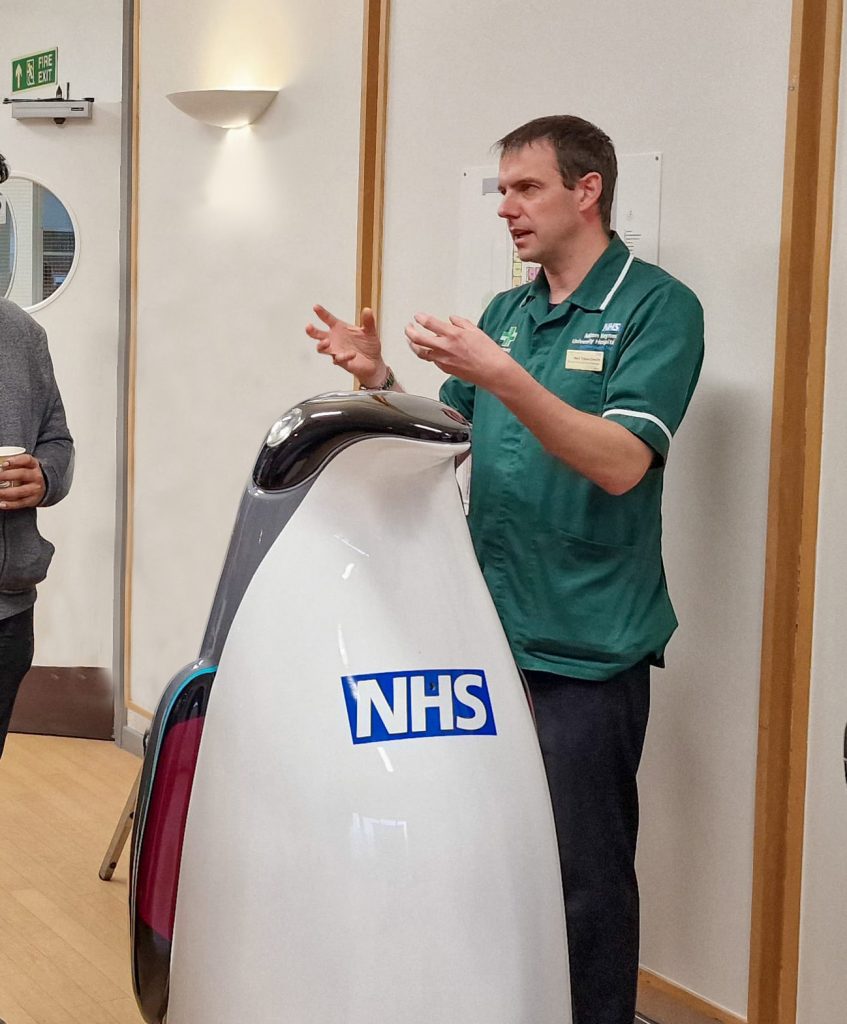 Academy of Robotics is best-known for being one of the first organisations to deploy self-driving vehicles on UK roads using its distinctive electric autonomous vehicle, Kar-go. The company has an established track record of developing technology to support staff, particularly in the public sector.

Milton’s technology builds on Kar-go’s earlier work, which includes carrying out deliveries of medicines to people’s homes during the Covid-19 pandemic and running logistical errands to support RAF personnel at RAF Brize Norton. In developing this technology, the Academy of Robotics has drawn on several systems developed for its Kar-go self-driving delivery vehicles to help Milton navigate around obstacles such as people, wheelchairs and beds inside a hospital.

As part of the trial, Milton, the Helper Bot, will learn to safely navigate the environment between the hospital’s pharmacy and a selected in-patient ward to test how similar robots can be used to collect non-controlled medication and deliver these securely to ward staff. Milton would be used to support the busy Pharmacy team by collecting medication from the in-patient pharmacy and delivering these across site on some of the longest routes in the hospital where it will be unloaded by ward staff.

MKUH has already successfully introduced a number of new processes and automations including the implementation of a surgical robot to aid complex surgeries across colorectal, gynaecology and general surgery, reduce patients’ length of stay and complications in surgery as well as an integrating artificial intelligence across Imaging, allowing staff to see all the information they need about a patient to improve decision-making.

The ‘Milton’ Helper Bot was designed in collaboration with hospital staff through a series of online engagements and in-person design-thinking workshops attended by hospital workers from a broad range of departments including pharmacy, pathology, estates and support services. As well as selecting the final design, the name ‘Milton’ was selected following an internal poll.

The partnership with MKUH, which is largely funded by the Academy of Robotics, started in early 2022, with the first trial in a hospital setting taking place in November 2022 before further testing in early 2023. Data and feedback from the trial will be used to understand how this technology can be safely scaled across the hospital site in the future and the potential for use across the NHS.

“Across the hospital, our Pharmacy team does an incredible job to ensure that our patients receive the medication they need to return home in a timely manner. We are working with the Academy of Robotics team to introduce new technology that can work alongside our existing workforce to facilitate faster delivery and take some of the pressure off our teams.

This trial is an opportunity to test the safety and efficacy of this technology and we will continue to work closely with all teams involved to understand how it can be most effectively utilised in the future.”

Introducing robots in a hospital offers some unique challenges as William Sachiti, Founder and CEO at Academy of Robotics, explains:

“How people feel when they interact with technology is also particularly important in a hospital. We make some of the most complicated machines in the world. The reasons why we make them and how such machines are used matters a lot to us. These Helper Bots are there to try and make life that little bit easier for both hospital staff and patients: to be there when needed and out of the way when they are not.

“It is our hope that this technology will offer a positive experience for all and we’ll continue to test and improve both the technology and experience it creates as we scale up the programme.”

Why the WTO dispute on U.S. export restrictions matters?

Namibian Cuprous Oxide Gemstone May Be Key to Quantum Computers

Namibian Cuprous Oxide Gemstone May Be Key to Quantum Computers